March is “monarch madness” in the mountains of Mexico as the butterflies leave their warm
sanctuary and fly north. Much thanks to Lynn Horsley (KC Star journalist) and her brother, Scott Horsley (NPR News) for sharing their travel experiences into the world of monarchs. Below is an excerpt from Scott’s Butterfly Diary. Photo credits go to  Scott Horsley. 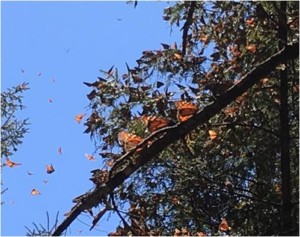 “We’d just come from a spectacular hike in the El Rosario butterfly reserve, one of a handful of places where Monarch butterflies spend the winter and mate before spreading north to the US and Canada—a migration that will take five generations to complete.

Late March is the tail end of the monarch season in this part of the world, and we were a little afraid we might be too late to see the butterflies.  We needn’t have worried.  As we climbed a steep staircase trail into the reserve, we saw at first a few, then hundreds, and eventually thousands of bright orange and black butterflies.  The trail is lined with yellow milkweed flowers and when it’s sunny, the butterflies feed on the milkweed nectar.  Higher up in the forest, they hang in clumps from the trees or fly around mating.  Every so often, our group would fall silent and you could hear the gentle flapping of countless butterfly wings.

Near the top of the trail, two guides ushered us onto a roped-off path.  As we left the crowd behind, we half wondered if they’d pull out weapons at some point and hand us over to a butter fly extortion cartel.  But they simply showed us to a secluded Monarch resting area.  I like to think they were impressed by the “Mariposa Madness” t-shirts I’d designed and forced everyone in our group to wear.

The critical monarch habitat is threatened by illegal logging in Mexico (and other pressures further north), so the World Wildlife Fund and others are trying to impress upon the locals the economic benefits of preserving the butterflies.  Local ejido members have been hired as guides and rangers and there’s a nascent ecotourism industry.”

Lynn says the sight and sounds are wonderful. The rangers told them all the milkweed planting and habitat improvements are making a difference for the monarch butterfly. Keep up the good work Midwest!

About the Author: Carla Dods